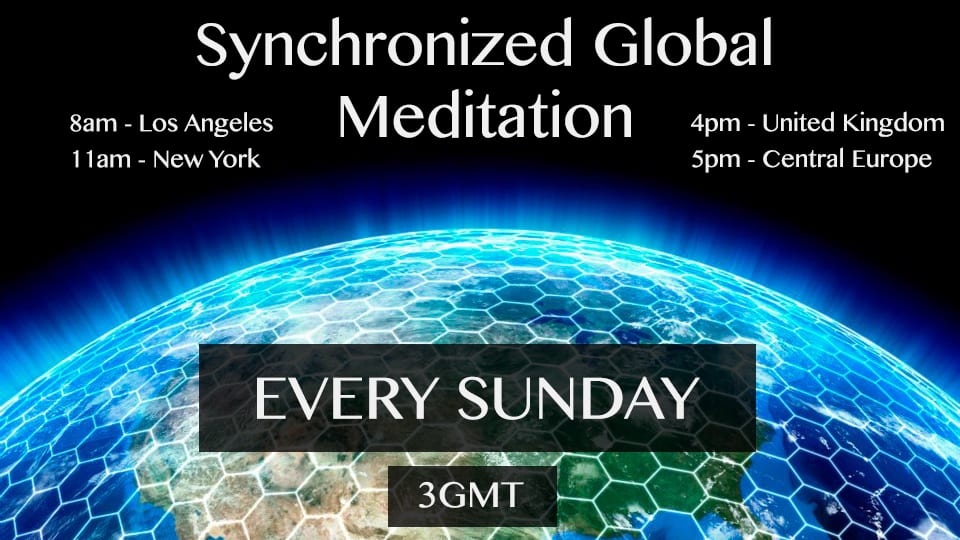 We live in a world today where the idea of group power is being rekindled and where it’s momentum is gathering.  Humanity as a whole is remembering that it is thoughts and actions of kindness, honesty and equality for all that create positive change.

One initiative that is expanding throughout religious and spiritual groups, as well as on blogs and other social media sites is globally synchronized meditation/prayer gatherings.

To some, believing that thoughts or prayers can influence the physical world around them can be dubious. To a quantum physicist on the other hand, thoughts influencing the world around them are something believed in and something that has repeatedly been shown to be true in scientific studies.

In 1974 an experimental study observed three different gatherings of over 7,000 people meditating each morning and evening for three consecutive weeks.  The study took place in Fairfield, Iowa (December 17, 1983-January 6, 1984), The Hague, Holland (December 21, 1984-January 13, 1985) and Washington, DC (July 1-July 10, 1985).  The results were astounding.  According to the Rand Corporation, a think-tank based in California, “acts of global terrorism resulting in fatalities and injuries were reduced by 72%.”  Time series analysis was used in this study to rule out possibilities that the reduction in global terrorism was caused by pre-existing trends, drifts in data or cycles.

Scientists believe this is due to a coherent resonance being created in the Unified Quantum Field by those meditating.

How then does this spread to an entire group from one localized position?

Think of a laser. Its coherent light is established by what is known in physics as the Field Effect. The Field Effect’s principle, according to the Institute of Science, Technology and Public Policy is “that it is not necessary to act individually on each individual constituent of a system, but that the system can be handled in one stroke at the collective level.”

The 7,000 people meditating created a Field Effect of harmonious coherence that spread throughout the collective–which in turn helped to reduce acts of terrorism (incoherent, disruptive energy).

This effect, which has also been called the “Maharishi Effect,” has had over 600 scientific studies conducted in 33 countries and in over 250 independent research institutions. The evidence overwhelmingly correlates synchronized group prayer and meditation having extremely positive social, political and economic benefits to the world.  Positive correlations for numerous health benefits to the individual were also observed and confirmed.

Today this structured and coherent energy is being calculated by the Global Consciousness Project (GCP), whose logistical home is the well-known Institute of Noetic Sciences. The GCP has been collecting data for over 15 years, with up to 70 host sites worldwide, using random number generators. The GCP notes that, “Random number generators (RNGs) based on quantum tunneling produce completely unpredictable sequences of zeroes and ones. But when a great event synchronizes the feelings of millions of people, our network of RNGs becomes subtly structured. We calculate one in a trillion odds that the effect is due to chance. The evidence suggests an emerging noosphere or the unifying field of consciousness described by sages in all cultures.” Major world events, such as the 9/11 attack, Princess Diana’s passing and worldwide meditations, along with many other events, have been recorded by the GCP and has shown that synchronization of the RNG’s has occurred when the minds of many people from around the world were involved.

What then can we do as individuals to help create a better world?

There are literally countless answers to this question, with one being to join in synchronized global meditation and prayer gatherings. In August of 2014, an open letter on a popular blog was written and subsequently went viral throughout the internet. The open letter asked to receive ideas on a specific time for a synchronized global meditation gathering.  A few days later the collective established that at 3pm GMT, every Sunday, this gathering is to occur. This is equivalent to 5pm in Central Europe, 4pm in the UK, 11am in New York and 8am in Los Angeles. You can join the Facebook event invitation for the event here. Also, The Master Shift has organized a synchronized global meditation on Earth Day, April 22, 2015, at 9:30pm eastern time. This day will also see The Master Shift and many other groups around the world celebrate the abundance of our Earth and offer thanks to her by planting seeds and trees everywhere.

Everyone is invited and encouraged to spread the word to as many people as they wish. Churches, yoga classes, the workplace, meditation partners, friends and groups are all good ways to make this available to more people.

What if I don’t know how to meditate?

Don’t worry, meditation is not hard.  Here are a few words from world renowned speaker and author Brendon Burchard on how he meditates through repeating the word “release” throughout his mind, body and spirit.

Friends. The rekindling and growing flames of unity within humanity will not stop and will once again be claimed.  As famous Pierre Teilhard de Chardin has beautifully written, “Someday after mastering winds, waves, tides and gravity, we shall harness the energies of love, and then, for the second time in the history of the world, man will discover fire.”

Lance Schuttler graduated from the University of Iowa with a degree in Health Science and is Director of Creative Health Non-Profits for Personable Media. He is passionate about holistic and naturopathic medicine as well as helping to bring awareness to the efficient, sustainable and health-promoting transition that our world’s current socio-economic model is rapidly undergoing.