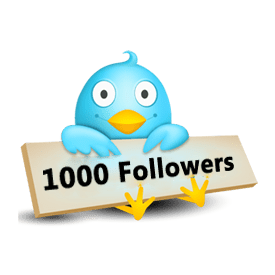 Why is having a Twitter account important for small business owners?  To sum it up, it allows your customers to communicate with you.  Whether you’re providing a service or a product, the ability to touch base with customers should always be priority number one.  If you aren’t making customers happy you aren’t allowing those customers to be advocates to your business.

This article will discuss how I successfully acquired my first 1000 Twitter followers, and how I’m using it to give value to my community and build my network. In short…

Looking to gain twitter followers to reach 1000? You’ve come to the right place.

I, just like the large majority of Twitter users out there, failed the first time I attempted using Twitter.  Its a different breed–yes.  In fact I didn’t really get the hang of Twitter until my third or fourth time attempting it, so don’t feel bad if you fall into this boat.  The trouble is most people don’t understand the basic concepts to Twitter, and how it can help you personally develop–as well as your business.  Let me illustrate with a story that lead to several strong business relationships for me all because of the power of Twitter.

In late April 2013 I searched the terms “entrepreneur” and “MN” from the advanced Twitter search.  About the fourth tweet down was an invitation to an entrepreneur conference in the twin cities coming up.  The conference covered a variety of topics–all of which I am highly interested in.  I signed up for the conference through the link in the tweet, and drove to the conference just one day later.  At this conference not only did I gain valuable information I very much needed to help propel me in the business world, but I gained mentorship from people at the conference, and became a mentor for several others. I also met the attorney who now handles all my small business ventures there.  This was all made possible because of the networking opportunities created using Twitter.

To me this social network is like a mini LinkedIn.  The difference is people communicate in 140 character messages, all while still giving value to their followers. When a person follows you it can be viewed as an invitation to connect, which you can accept by following them back.

The Twitter mindset to have when going about who you should follow back I am going to refer to a question posed to Mark Schaefer, the author of The Tao of Twitter

, at Social Media Marketing World ’13 this year.  Mark’s mindset is when someone invites you to connect, and they’re an actual human (a person in the display picture), there is no reason not to follow them back.  Why not give them an opportunity to bring value to your life?  I have since been adapting this philosophy into my Twitter-etiquette and found an enormous about of success from it.

Tip #2 – Touch Up Your Profile

This means creating a Twitter background image that speaks volumes about the type of connections you are interested in making.  You can see in my Twitter background I use descriptive words to describe who I am.  Its also formatted to fit the dimensions Twitter of a header image (1252×626).

Your description of yourself and your interests is important.  People search for other Twitter users who are interested in the same things they are.  Often people will search based on your geographical area as well–so its important to fill out your profile with your accurate geographical information.

If I had to put a figure on the number of tweets an average active Twitter user produces, I would say 3-10 per day.  Some users are very active and post 100+ times per day, but too much posting can lead to people unfollowing you.

What you are going for with your use of Twitter is to give value to your followers with each tweet.  This means the articles you read and tweet, the inspirational quotes you choose, and also the “in the moment” thoughts you display.

Twitter is meant to be personal. This means be yourself, tweet in the moment. Mix it up!  Continue sending value to your Twitter followers in the form of articles you’re reading and quotes/thoughts you find inspiring.

People want to know who you are and make a real connection with you.  Help them do that.

Tip #4 – Formatting of your tweets is important

RT @thesaleslion: You can either address your customers questions or ignore them. But know this, *someone* is willing to address them.

This requires a little more effort than simply clicking the “retweet” button. This format is more enabling for your Twitter followers to click on the original tweeters’ Twitter handle and follow them as well.  People who follow you will pay attention to what you say, so its important for your photo to show up and not someone’s they don’t recognize.

When a user’s photo appears in your followers “home feed” their eyes could glaze over it.  When your display picture appears, which should also be a headshot of you because it adds personal validity to conversations, your followers recognize it more distinctly because of prior credibility you’ve built up with them.  This will enable a stronger probability they will not only read and appreciate the value you’re sending them in your retweet, but to the original author as well.

Tip #5 – Communicate with your followers, and those you follow

Ask questions and answer questions when others ask.  Your mindset should be to create conversation and discussion among your community and network within Twitter.  When your retweeted, tweet back thanking them for the retweet.  Ask how their day is if you feel so inclined.  Find any way you can give value back to your community and enable the opportunity for others to give value as well.

A recent Twitter interaction I had with Forbes Top 10 Influencer @KimGarst illustrates this perfectly.  We gave each other value, then gave value to not one but two New York Times best selling authors.  Quite the feat for 140 characters at a time right?

What have you found helpful in acquiring more followers?  I’d love to hear.  Respond in the comments!